skip to main | skip to sidebar
FOR ALL YOUR KITTEH NEEDS!

Posted by Hermione Granger at 21:56 No comments:

But of course, it is good to be home.  Mikey and Izzy were happy to see us...  all of MIW were.  Woah!  Mikey just fell off the table!

Meowma
Posted by Hermione Granger at 17:22 No comments: 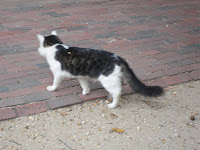 Here I am in Colonial Williamsburg, Virginia.  We have seen lots of stray cats here!  I believe three to be exact.  I call them... Colonial Kittehs!!   I miss you sooo much, Izzy and Mikey!  I wonder how successful Holly and Hannah's humans have been on Izster's flea medication... Thx 4 taking care of 'em, H&H's Meowma and Pawpa!

Posted by Hermione Granger at 10:21 No comments:

And the winners are...

OK so a couple years ago my cat Squeak seemed to have a deer friend, that's right two E's not e a. they had this little game hmmm let me think I cant really remember but I think it involved them running after each other and sort of "tagging" each other and sometimes his friend would come near the deck and sometimes the might go over the fence or something I'm not sure anyway it was pretty cool and funny and weird.


And Polkadotgirlie, with her 1st place Funny entry, explains how she'd never expected her new dog, Sadie to be so big:

We are in Colorado now, and we are going to pick up our new dog, Sadie!

She is a labradoodle and we are pretty sure she will be apricot colored and curly.

When we got to the live cargo building, ( I am not sure if it is called that!) there

were 3 dogs there. There were 2 curly apricot ones, one big, one little, and this

one black tiny dog that was barking. The black one and the little apricot one

were up at the front of their kennel, jumping and barking their tiny barks. The

big apricot one, however, was curled up at the back of the kennel and was looking

at us. We thought sadie was the tiny apricot one, because we had seen pictures of her,

and she was pretty small. The black one got handed out, and we were waiting to take

home the tiny apricot one, and then she got handed out to another person! When we

got to the Big apricot one, they called out our name! I never thought she would be that big!

And last but not least, Cida Justen explains in her 1st place Amazing entry how her dog Lindinha understood that a kitten needed help:

It is amazing , a little dog that behaves like a wise, mature person, at least sometimes. Just like many other little dogs, Lindinha has been spoiled by all the love and attention that we have been giving her since she first came to our family 8 years ago. Even though she is less than a foot tall and weighs around 7 pounds, she thinks she is the owner of the house, and that you are there to serve her. The most outstanding thing in her personality is her craziness for food, which makes her a truly professional beggar. We always knew that she could understand what was happening around her to a certain level, but we never thought she was able to behave according to it.

Making a long story short, this is what happened. One morning, just like any other morning, my mother took Lindinha to a walk up the hill. On their way back home, my mother found this little, hungry and apparently sick kitten which she decided to take home for a few days. Well, when the three of them, the cat, Lindinha and my mother got home, my mother was sure that it was going to be a problem to try to feed the kitten because of Lindinha’s craziness for food. So, she looked at Lindinha and explained to her that the kitten was going to stay at the house for couple days until it got better and until she could find a nice person to take care of him. Them, she put on the porch of the house some dry food, water, and milk, which Lindinha never looked at even after the kitten was gone. Isn’t it amazing? She basically understood that the kitten needed help.

Posted by Hermione Granger at 09:18 No comments: 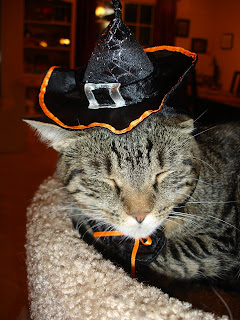 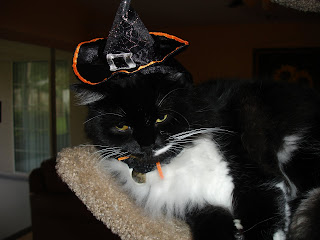 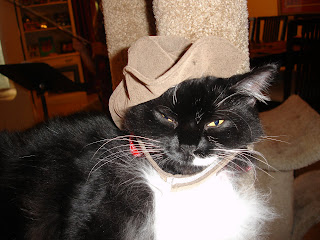 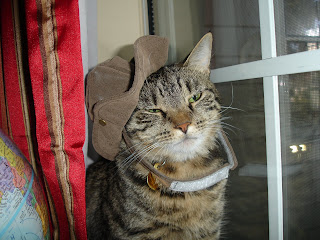 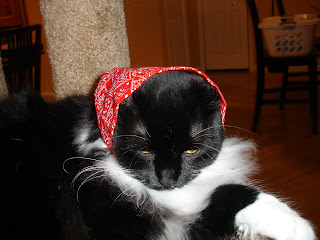 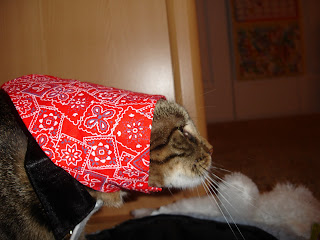 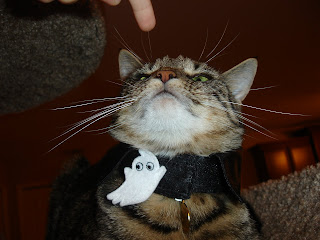 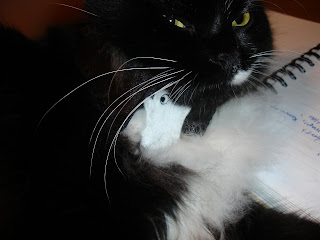 
Hi there! Now it's October, and we're all getting ready for Halloween, right? Well, Mikey and Izzy are. Yesterday my mom went to PetSmart to buy food and litter, and also bought cowboy/girl, ghost collar, and witch cat costumes. Here you can vote for your favorite Kitteh costume. Tell me via comments, email or the poll at the top of www.KittehNewz.com which one you like the best! Sorry some of the photos got kinda cut off -- just click each pic to view it in a different tab.

Welcome to The Kitteh Newz!

This is The Kitteh Newz, all the newz about my 1-year old cat siblings, Mikey (male) and Izzy (female). Come on in! Explore their world!

What color are your cat's eyes?

Books in my unpublished series - Whispers of the Whiskers

meowma@kittehnewz.com
Please send me YOUR newz, or anything else!

Hermione Granger
Hogwarts, United Kingdom
Why do you want to know about me, Blogger? Stalker. >:C